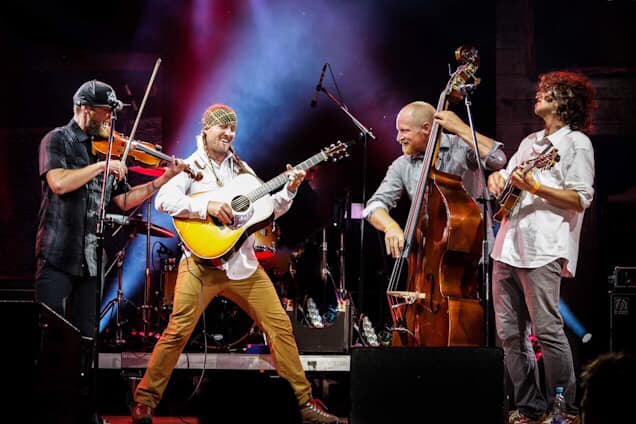 Rapidgrass embodies the notion that nature, and particularly mountains, can bring out the best in our art, and we have dedicated much of our creative energy into bringing that art back to the people of the mountains. Rapidgrass focuses on travel to mountain towns and inspires mountain people and athletes around the globe. Our music is motivated by and made for those who find peace in the mountains. We focus our energy to outdoor mountain lifestyle/culture events. Focusing our travels to mountain towns has also given us a great palate of mountain music styles from which to draw.

The band released ‘RAPIDGRASS QUINTET’, in 2013 and was voted as one ofthe top 5 albums by the Mountain Arts Culture Colorado. In 2015 they then released ‘CROOKED ROAD’ and went on to win the prestigious ROCKYGRASS band contest that same year. Rapidgrass produced their 3rd album, ‘HAPPY TRAILS’ in 2017 and was released at the eighth annual Rapidgrass Music Festival June 23-25 2017. The band recently released their 4th studio album ‘CHAMONIX SESSIONS’ at the 10th annual Rapidgrass Festival July 2019. Rapidgrass has also been granted a recording fellowship at the Banff Centre of Arts and Creativity where they plan to record studio album #5 November 2019! Rapidgrass has had the pleasure of playing mountain music throughout Colorado, Alaska, the lower 48, Ireland, Hungary, Scotland, Poland, and the European Alps. The band is eager to share new music with you!